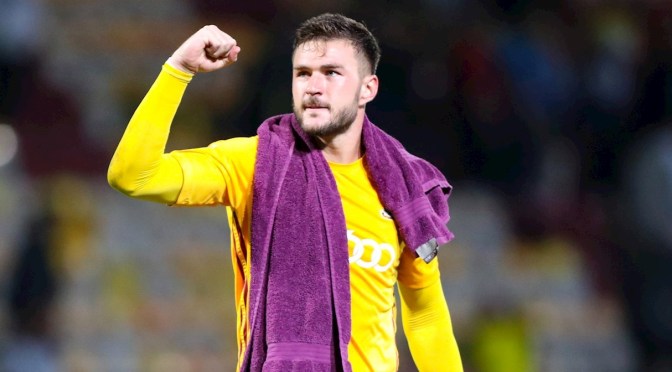 It may not have been the debut season in terms of league performance that he would have hoped for, but Bradford City goalkeeper Richard O’Donnell is just eight games away from joining the club’s history books for the right reasons.

Over a hundred goalkeepers have represented Bradford City in competitive football: from Arthur Seymour in the club’s inaugural season of 1903-04 to O’Donnell in the present day – but only 11 of them have the distinction of featuring in every single game of a league season.

O’Donnell, having played in the first 38 games of the 2018-19 campaign, is now within touching distance of joining some of the most fondly-remembered goalkeepers in Bradford City history. Here, in chronological order, are the 11 men, O’Donnell is hoping to join as a league ever-present.

Arthur Seymour (1903-04): 34/34 games
Arthur Seymour was the first man to keep goal for Bradford City – a role he assumed for the entirety of the club’s inaugural league season in 1903-04 as City finished 10th in Division Two.

James McLaren (1923-24): 42/42 games
It would be 20 years until another goalkeeper became a league ever-present for City, with James McLaren playing in all 42 league games in 1923-24 under David Menzies’ management.

Walter Shirlaw (1928-29): 42 games
Walter Shirlaw had two spells with Bradford City, but at the start of his second period with the club, he featured in every league game as the Bantams stormed to the Division Three (North) title.

Matthew Middleton (1946-47): 42 games
Matthew Middleton was City’s next goalkeeping ever-present, featuring in every game of the first league campaign after the conclusion of World War Two.

Geoff Smith (1954-55): 46 games
Geoff Smith would play 200 league games in succession for Bradford City – the third-longest streak of anyone in the club’s history, and most for a goalkeeper. His first entire league season was 1954-55.

James Fisher (1963-64): 46 games
1963-64 was a rare season of success for City in what were a turbulent 1960s – with goalkeeper James Fisher one of three league ever-presents that season under Bob Brocklebank.

Eric McManus (1983-84): 46 games
A backbone of the side that would win promotion the following season, playing 40 times, Northern Irish goalkeeper Eric McManus was City’s eighth league ever-present between the sticks.

Gary Walsh (1998-99): 46 games
Gary Walsh quickly became a key part of Paul Jewell’s side in 1998-99 – and that loyalty in him paid off, as Walsh played in every game en route to promotion to the Premier League.

Donovan Ricketts (2006-07): 46 games
The big Jamaican is the only keeper on this list to play in every game of a season where City were eventually relegated: fingers crossed O’Donnell does not become number two.

Jon McLaughlin (2013-14): 46 games
City quickly solidified themselves in League One upon promotion in 2013, and McLaughlin’s ever-present record underlined the role he played in that success.