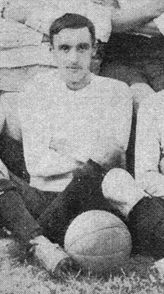 Scottish-born forward Jack Forrest was signed for Bradford City in the summer of 1903, following a spell at Stoke City which started with him scoring twice on his debut, but ended just a handful of appearances later after he became homesick.

Forrest had earlier impressed for Wishaw United and Motherwell north of the border, and was lured back to England by the City directors ahead of the club’s inaugural league campaign in 1903.

Forrest scored seven goals in 30 games in 1903-04, but would prove to be much more effective the following season. He ended 1904-05 as the club’s top scorer, scoring 17 times in 25 games: including four in a 9-0 FA Cup victory against Sunderland WE. However, that summer, he left City and returned to Scotland, signing for Hamilton Academical.

Signed from Watford – he had also played for Bristol Rovers – Farnall made 26 appearances for the Paraders in total: all of them coming in the club’s first season. He left in 1905 to join Walsall, before later playing for Barrow and Gloucester City.

John Beckram was born in Sunderland in 1881, and played for Sheffield United before becoming part of the first-ever side to play a competitive fixture for Bradford City.

Beckram has the distinction of owning Heritage Number #1, on account of being the first player listed in the team sheet against Grimsby Town in September 1903 alphabetically.

He was released by the club in the summer of 1905, after failing to make an appearance for City in the club’s second season of 1904-05.