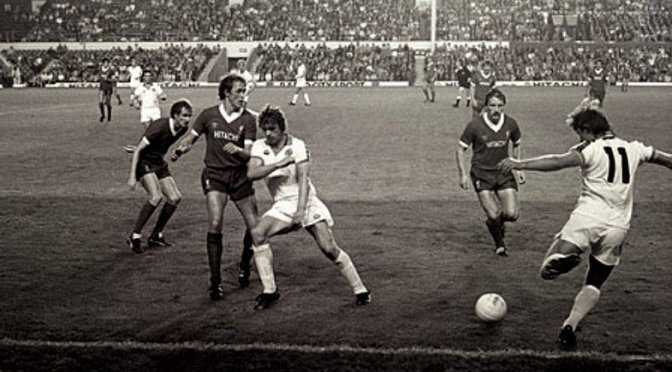 The cities of Bradford and Liverpool will unite on Sunday for Stephen Darby, as a sell-out crowd aims to raise as much money as possible for the Darby Rimmer Foundation. It will be a magnificent occasion and, ahead of it, it felt appropriate to look back at competitive meetings between the two sides.

Bradford City and Liverpool do, understandably, not meet in competitive football all that often. In total, there have been just 26 clashes between the teams in league games, with a handful of cup games thrown in to boot.

For context, that is significantly less than meetings against the likes of Manchester United (32), Tottenham Hotspur (32) and Chelsea (34). That is largely due to the fact that since City’s formation in 1903, Liverpool have spent just nine seasons out of English football’s top division.

One of those came in 1904-05, City’s second season as a Football League club. The two sides met for the first time officially on September 17th, 1904; John Beckram – the first player to receive a Heritage Number – scored in a 4-1 defeat at Anfield. The reverse fixture that season was equally one-sided; as Tom Watson’s side came to Valley Parade and won 4-2. Liverpool won promotion that season, and while the two sides met in the FA Cup in 1907 – City again succumbing to defeat in the Third Round – it wouldn’t be long before the Paraders joined them in the top-flight.

However, City’s first win against Liverpool was still some years away. In the club’s first two seasons in Division One, Liverpool won all four meetings – before our first victory at Anfield, on the opening day of the 1910-11 season, a campaign which would end with FA Cup success for City. Jimmy Spiers and Frank O’Rourke scored in front of approximately 20,000 people at Anfield and that season – the first and only time it has ever happened – Bradford City finished higher than Liverpool in the league standings. City came 5th, while Liverpool were 16th.

That was one of only two occasions in which Bradford City would win at Anfield – the other coming on New Year’s Day 1914, when Dicky Bond scored the only goal in a 1-0 win. Since then, City have been back to Anfield over half a dozen times and been beaten on every single occasion.

There was one other notable piece of business between the sides prior to World War Two; Liverpool sold forward Albert Whitehurst to the Paraders in 1929. He scored 30 times in 38 league games – including setting the all-time record for goals in a single game for the club, when he scored 7 against Tranmere in March 1929. It has still not been beaten to this day.

City were relegated from the First Division in 1922, and wouldn’t return for 77 years. Even when Liverpool dropped out themselves for a period in the mid-1950s, the Paraders were languishing in the third tier of the Football League pyramid. There was an FA Cup tie meeting between the sides in January 1924 – but it yielded a familiar outcome, as Liverpool won 2-1 at Anfield in the First Round.

It would be 56 years until the two teams met competitively again – but it produced one of Bradford City’s most legendary performances. George Mulhall’s Paraders were a mid-table Fourth Division side in 1980, while Liverpool were back-to-back league champions, and were just beginning a season that would see them lift the European Cup.

After seeing off Rotherham in the First Round of that season’s League Cup, City were given the plum tie: Liverpool over two legs. With almost the entire league pyramid between the two teams, City weren’t given a sniff – but on a Wednesday night under the lights at Valley Parade, the Paraders stunned the world.

A Liverpool side featuring the likes of Graeme Souness, Phil Thompson, Alan Hansen and Ray Clemence were beaten 1-0 thanks to Bobby Campbell’s goal. It raised hopes of arguably the biggest shock in League Cup history, but Liverpool set the record straight at Anfield a week later, winning 4-0 and continuing City’s miserable record at the ground.

City had to wait another two decades to lock horns with arguably the world’s most famous football club again. 11 points from the first 11 games in the 1999-00 Premier League season had raised hopes the Bantams could keep their heads above water in the top-flight, but a 3-1 defeat at Anfield in November 1999 – with goals from Titi Camara, Jamie Redknapp and Veggard Heggem – a sobering reminder of the jump-up in class the Premier League provided.

Of course, few City fans need reminding about the return leg at Valley Parade that season:

..and that was the last goal Bradford City have scored against Liverpool. The following season, City were beaten 1-0 and 2-0 and relegated from the Premier League – and the sides have not met since.

Sunday’s game, of course, is about far more than any football scoreline.. but a repeat of Campbell or David Wetherall’s heroics would at least raise a cheer from most of those inside a sold-out Valley Parade. Even if we all know deep down what the final outcome is likely to be.